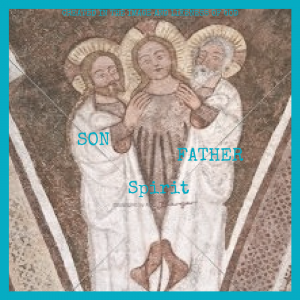 I remember the year (1992) when I met my Father. Of course, I’m not speaking about my earthly dad. I’m referring to the time I met my Father in Heaven, the Supreme Being, the Maker, The Creator God. Yes, one day out of the blue God sprang up in my life like a wolf after a rabbit. He literally hunted me down. (In Christian circles when God does this to a person we say, “The Hound of Heaven is after you.”)  Well, that Hound of Heaven came after me hard. And it was during this time of chasing and running that I remember thinking, “Why is God a He?” I even argued with DJ, my future husband (and a Christian) about this point: “Why does God have to be portrayed as a He?” I asked. “I mean, is it not enough that men on average make more money than women? Is it not enough that our governmental laws have been made up primarily by men. Is it not enough that men don’t have to get fat and give birth in utter pain? Why did God—the most important entity in the whole universe—have to be portrayed as a man?!  Why are men held so high above women?” (I had a pretty strong feminist background, so these questions came quite naturally to me.)

Of course, at this early stage of my just budding Christian life, I had no intimacy with God, no friendship, and so I knew very little about God. DJ, not knowing too much more than I did, gave me the pat answer: “God is invisible containing qualities of both genders so if you want to think of Him as a Her then go ahead.” 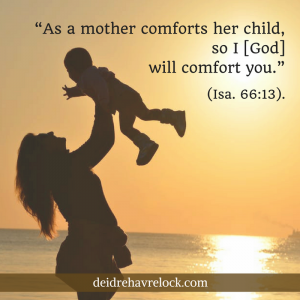 This is a factual statement since (1) the qualities of God’s character as found in the Bible contain both motherly and fatherly attributes and (2) the Bible does indeed tell us God is invisible:

It is God alone who has immortality and dwells in unapproachable light, whom no one has ever seen or can see (1 Tim. 6:16).

Now to the King eternal, immortal, invisible, to God who alone is wise, be honor and glory forever and ever. Amen. (1 Tim. 1:17)

However, the Bible isn’t so black and white with the image of God, since we are also told that Jesus is the very image (representation) of God—Jesus was the first one born over all creation:

He is the image of the invisible God, the firstborn of all creation (Col. 1:15).

Why would God leave me (and my gender) out of the family of God? Without a Mother how could we even consider calling ourselves a family? Are mothers that disposable? How can we possibly have a family with just a Father, Son, a mysterious “he” Spirit? (Was the Spirit another son or perhaps an uncle?) Well, eventually I decided I’d either have to accept this fact—that the God of the Bible wanted to be portrayed as a father and a son—or I’d have to toss out the Bible altogether. And since I was starting to trust God deeply, I decided not to toss out my Bible. I decided not only to accept the “He” but to completely embrace the “He” and I still embrace it today. God is my Father!  And Jesus is the son. Two persons with seemingly one image. But still, something inside me quietly longed for a Mother. This is when I began praying, “God, what about women?” And surprisingly, God began to answer me through a long journey of discovery. A journey where I was introduced to another person. A person who brings along with Her another image–the female image. You can read some of it here.

One question I get all the time (and it’s a question I rather like!) is “How can God be three persons with two images? How does that work?” Isn’t a spirit invisible?” Well, for those of you out there who have ever seen a ghost, I guess you understand better than any of us that, “Yes, a spirit can have an image and yes a spirit can be invisible.”

Now a good place to start our search for an image of the Spirit comes to us from the man who actually saw her—John the Baptist:

“Now when all the people were baptized, and when Jesus also had been baptized and was praying, the heaven was opened, and the Holy Spirit descended in bodily form like a dove upon Him, and a voice came from heaven which said, ‘You are My beloved Son; in You I am well pleased.’”  (Lk. 3:21-22)

In the above, we have Luke describing what John the Baptist saw on the day of Jesus’ water baptism. John saw a “bodily form.” The Greek words used here are (bodily) “sōmatikŏs” which means “a whole body” and (form) “ĕidŏs” which means “appearance of shape.” So John literally saw a “body image” come down from heaven and he described this image as “like a dove.” You will notice the phrase “like a dove” does not mean an actual dove was seen—it is a simile. A simile is a figure of speech comparing two relatively dissimilar things. In other words, a dove and God’s Holy Spirit are very different from each other (one is an animal and the other is God)—but similarities can still be drawn.

It is unfortunate so many Christians believe (and teach) that an actual dove was seen coming down from heaven. After all, there is nothing in the Bible that tells us God exists as an animal– Adam and Eve are the images of God. God also does not operate by illusion, manifesting Himself in a cloak of misrepresentation—God is all about revealing truth. He is a revelatory God. So despite the church’s longtime use of the dove as a symbol for the Spirit, we must leave behind the picture of a dove flying down from heaven and landing on Jesus’ shoulder. We must see the Holy Spirit as John saw her.

What exactly did John See during Jesus’ Baptism?

John did not see a dove, but he did see something, or rather someone. John is Jewish and the expression “like a dove” was a favorite and often used Jewish simile for female beauty and tenderness (see the Jewish Encyclopedia).[1] This is why the term “dove” is used often throughout the Bible (and Old Testament Apocrypha) to describe females:

It is decreed that the city be exiled, its slave women led away, moaning like doves and beating their breasts. (Na. 2:7)

The Lord gives the command; great is the company of those [women] who bore the tidings: And she who remains at home divides the spoil. Though you lie down among the sheepfolds, you will be like the wings of a dove covered with silver, and her feathers with yellow gold. (Ps. 68:11-13)

You have dove’s eyes behind your veil. Your hair is like a flock of goats, going down from Mount Gilead. (Song of Solomon 4:1)

Mother, embrace your children; bring them up with gladness, as does a dove; strengthen their feet, because I have chosen you, says the Lord. (2 Esdras 2:15)

What John saw was not an actual dove. John saw a beautiful woman, the Spirit, the Helper, come down from heaven, superimpose over Christ and remain with him. What John saw was what Jeremiah prophesied about long ago:

How long will you waver, O faithless daughter? For the Lord has created a new thing on the earth: a woman encompasses a man. (Jer. 31:22)

And the most natural way for John to describe this amazing vision of the very feminine Holy Spirit encompassing Jesus at his baptism was to say “the Holy Spirit descended like a dove.” God has done such a “fresh, new thing” that even today we don’t understand the depths of what God is truly doing through His Spirit, our Mother. 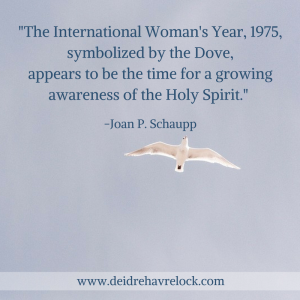