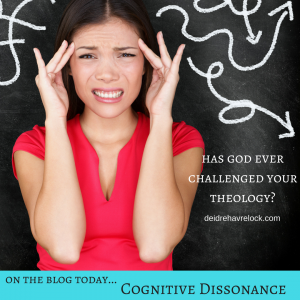 When the Holy Spirit began challenging my theology in regards to her person, the result was a deeply uncomfortable feeling. In the beginning, I remember not wanting to open my Bible just in case I stumbled upon anymore evidence regarding a “she” Spirit. I remember praying and asking the Holy Spirit to, “Please, please take these uncomfortable “she” thoughts away from me because I don’t know what to do with them!” I remember sitting in church with the pastor’s voice grating on me, “The Spirit gives you birth–he will birth new life into you.” I began skipping church on Sunday just to alleviate the contradicting pain in my head.

The discomfort I was experiencing was real. After all, I had been taught that the Spirit was male–an invisible he Spirit–but as I read through my Bible the evidence was piling up. It was becoming increasingly apparent to me that my “he” Spirit was actually a “she” Spirit and… she wasn’t always so invisible. In fact, the discomfort became so real that I basically hid in  hole for a number of years in order to distance myself from discomfort. But every once in a while I would timidly emerge from my hole in an effort to connect with civilization. I remember one instance where I had met a woman in ministry and we just clicked. You know, it was one of those instant friendships where you and this other person share so many commonalities that you are instantly drawn together. Well, I decided to tell my new friend about my thoughts regarding the “she” Spirit. It would be so great I thought to be able to talk openly about what I was learning about the Holy Spirit being my mother. I was sure this would be a safe place. But immediately my new friend’s face darkened and her smile faded. She said to me rather coldly, “Deidre, I think you are deceived.” And that was that. It was the end of our budding friendship.

I went home that evening devastated, telling the Spirit that it just wasn’t fair. You see, I was a writer and I wanted to write about this topic (the femininity of the Holy Spirit). But how, I asked God that night, could I write about something that nobody wanted to hear about–not even my friends? The truth was, this journey I was on was proving to be both frustrating and lonely. In fact, on this particular night I was questioning whether I was on the right path at all. I remember telling the Spirit how much I just wanted to fit in. Yet, in order to fit in it seemed that I would have to ignore my new belief in a very feminine Holy Spirit. Well, I wanted to fit in. “Take away this revelation!” I (overly dramatically) cried that night. “I’m not the right person for it. It’s too difficult to talk about and it’s uncomfortable.” At that point, I remember grabbing my Bible and saying to God, “I’ll read your word for a bit because you always make me feel better and then maybe I’ll be able to sleep.” I opened my book and my eyes fell on …

“Therefore every scribe who has been trained for the kingdom of heaven is like the master of a household who brings out of his treasure what is new and what is old.” –Mt 13:52

Of course, it all made sense to me now. I was speaking about a Bible teaching that was so old the church had seemingly lost it; therefore, it felt completely new. And new is never easy. New is always uncomfortable. I decided then that I would have to learn to live within this tense area of discomfort.  I would have to accept that people will react in negative ways just like I did in the beginning.  That verse given to me at midnight didn’t alleviate any of the uncomfortably feelings I had. Neither did it alleviate any of the uncomfortable feelings that other people I encountered would go through. But the verse did keep me going. What I didn’t know at the time was that I had simply been experiencing cognitive dissonance.

What is cognitive dissonance? Well, below are a few definitions from the internet to help explain this uncomfortable emotional state that overcomes us when we are forced to confront two thoughts that contradict each other. However, it may be easier–and more fun–to just show you what CD looks like in my favorite show The Matrix:

The easiest way I can explain CD is that it’s that uncomfortable feeling that comes upon us when we suddenly stumble into something new–something that not just opposes what we currently believe, but also provides evidence that what we have always assumed, or expected, or have been taught might just be completely wrong. After the evidence is provided, a new belief must be formed that allows the evidence to exist OR we can hold to our belief by dissociating from the evidence.

I have survived many CD moments, and I am sure (ugh) I will make it through many more. How about you? Have you been struggling with CD?