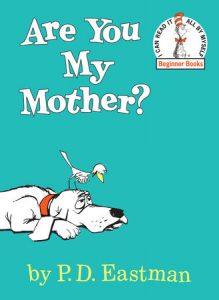 Why did the apostle Paul say the Jerusalem above is the mother of us all? Is a city our mother? Or, does the city represent a person… a female person who gives us spiritual birth? For this study, we’ll be looking at the rather confusing passage in Galatians (see below) where we are told by Paul that “the Jerusalem above is free which is the mother of us all.” This passage reveals to us that Paul was very much aware of his spiritual Mother–the Holy Spirit. So if you’ve ever wondered if Christians have a spiritual Mother, than this is the study for you!

“For it is written that Abraham had two sons: the one by a bondwoman [Hagar], the other by a freewoman [Sarah].  But he who was of the bondwoman [son named Ishmael] was born according to the flesh, and he of the freewoman [son named Isaac] through promise, which things are symbolic. For these are the two covenants: the one from Mount Sinai which gives birth to bondage, which is Hagar for this Hagar is Mount Sinai in Arabia, and corresponds to Jerusalem which now is, and is in bondage with her children but the Jerusalem above is free, which is the mother of us all.“  (Gal. 4:22-26, NKJV)

The New Jerusalem Represents a Woman — Our Mother, the Holy Spirit

There are Two Jerusalems

Let’s start off by looking at the two distinct Jerusalems described in the Bible. The first is the natural city of Jerusalem where God’s people, the Israelites, lived and worshiped (and from where the Jewish people were taken captive during the Babylonian siege); the second city is the spiritual city called “New Jerusalem.” This city comes down from heaven. Therefore, there is a natural Jerusalem and there is a spiritual Jerusalem. Paul referred to the spiritual Jerusalem when he said, “But the Jerusalem above is free, which is the mother of us all” (Gal. 4:26). Read about these two Jerusalems as described in the scriptures below:

Awake, awake! Put on your strength, O Zion; put on your beautiful garments, O Jerusalem, the holy city! For the uncircumcised and the unclean shall no longer come to you. Shake yourself from the dust, arise, and sit down, O Jerusalem; loose yourself from the bonds of your neck, O captive daughter of Zion! For thus says the Lord: “You have sold yourselves for nothing, and you shall be redeemed without money.” (Isa. 52:1-3, NKJV)

Then I, John, saw the holy city, New Jerusalem, coming down out of heaven from God, prepared as a bride adorned for her husband…. Then one of the seven angels who had the seven bowls filled with the seven last plagues came to me and talked with me, saying, “Come, I will show you the bride, the Lamb’s wife.” And he carried me away in the Spirit to a great and high mountain, and showed me the great city, the holy Jerusalem, descending out of heaven from God, having the glory of God. Her light was like a most precious stone, like a jasper stone, clear as crystal. Also she had a great and high wall with twelve gates, and twelve angels at the gates, and names written on them, which are the names of the twelve tribes of the children of Israel: three gates on the east, three gates on the north, three gates on the south, and three gates on the west. Now the wall of the city had twelve foundations, and on them were the names of the twelve apostles of the Lamb. (Rev. 21:2, 9-14, NKJV)

Now let’s regress for a moment and consider a prior teaching: the current Catholic thought is the woman in Revelation 12 is Mary, the Mother of God. The current Protestant thought is the woman in Revelation 12 is the “personified” city called “New Jerusalem.”  In this last view no woman actually exists. The woman is simply an invented image to convey the reality of God’s new Holy City—the place where all God’s children will eventually dwell. But, we must ask ourselves, is this “New Jerusalem,” a city that Revelation 21:21 tells us has a street made of pure gold—is this what Paul meant when he said our mother was Jerusalem?

If so, then I feel somewhat cheated because a city is not much of a mother at all. She is, after all, rather cold, hard and, well, not alive. And a mother who is not alive is no a mother at all. (Try to tell a child you want to replace their loving mother with a pretty building and I am sure you will get a rather bewildered look.) To find out why Paul would call our mother a city, read the following (extended) verses found in Galatians:

There are Two Ways to be Born: Flesh and Spirit

For it is written that Abraham had two sons: the one by a bondwoman [Hagar], the other by a freewoman [Sarah].  But he who was of the bondwoman [son named Ishmael] was born according to the flesh, and he of the freewoman [son named Isaac] through promise, which things are symbolic. For these are the two covenants: the one from Mount Sinai which gives birth to bondage, which is Hagar for this Hagar is Mount Sinai in Arabia, and corresponds to Jerusalem which now is, and is in bondage with her children but the Jerusalem above is free, which is the mother of us all.  For it is written: “Rejoice, O barren, you who do not bear! Break forth and shout, you who do not travail! for the desolate has many more children than she who has a husband.”  Now we, brethren, as Isaac was, are children of promise.  But, as he [Ishmael] who was born according to the flesh then persecuted him who was born according to the Spirit, even so it is now. Nevertheless what does the Scripture say? “Cast out the bondwoman and her son, for the son of the bondwoman shall not be heir with the son of the freewoman.” So then, brethren, we are not children of the bondwoman but of the freewoman. (Gal. 4:22-31, NKJV, bold added) 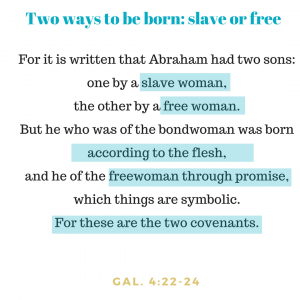 In protestant thought the woman who bore us is a city. The heavenly city, New Jerusalem, becomes like a mother to us as we move from the bondage of the natural Jerusalem to a city of freedom. You will notice, though, that the verses above in Galatians actually have little to do with being born from a city and more to do with the two covenants–we are the children of the free woman, born of the Spirit (NOT a city). To better understand what Paul is teaching us let’s look at the chart below: 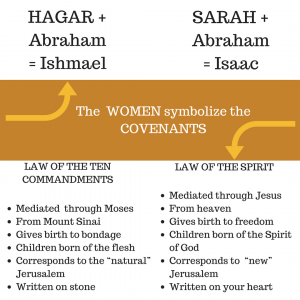 There are Two Covenants:

The Ten Commandments are considered a curse because they do not rest on faith–the promise of God in which the barren Sarah eventually and miraculously conceived Issac.

For all who rely on the works of the law are under a curse; for it is written, “Cursed is everyone who does not observe and obey all the things written in the book of the law.” Now it is evident that no one is justified before God by the law; for “The one who is righteous will live by faith.” But the law does not rest on faith; on the contrary, “Whoever does the works of the law will live by them.” Christ redeemed us from the curse of the law by becoming a curse for us—for it is written, “Cursed is everyone who hangs on a tree”[1]— in order that in Christ Jesus the blessing of Abraham might come to the Gentiles, so that we might receive the promise of the Spirit through faith. (Gal. 3:10-14, NRSV, bold added)

[1] Dt. 21:23 states that if a person commits a sin deserving of death then they should be hung on a tree and considered cursed.

The New Covenant is a person—God’s Spirit. A Spirit of life who scripture tells us is free:

God called Sarah “the mother of Nations.” She was however barren–unable to produce children.  Not willing to wait for the promise of God Sarah decided to conceive a child through her slave girl (Hagar). This child was born of the flesh and not of the promise. But later, God’s promise came about (in God’s time) and Sarah conceived Isaac who would go on to bring about a very large family, so the words came true, “Rejoice, O barren, you who do not bear! Break forth and shout, you who do not travail! for the desolate has many more children than she who has a husband.” Sarah is, therefore, symbolic for the “New Covenant” or the “Holy Spirit” who then corresponds to the city “New Jerusalem.”

Our mother is not a city; rather, the city represents both the Spirit and her children. For example, read the following verses and understand how we, those who believe in Jesus and have received re-birth by the Holy Spirit, are being built into a Holy City through the Spirit:

For through Him we both have access by one Spirit to the Father. Now, therefore, you are no longer strangers and foreigners, but fellow citizens with the saints and members of the household of God, having been built on the foundation of the apostles and prophets, Jesus Christ Himself being the chief cornerstone, in whom the whole building, being fitted together, grows into a holy temple in the Lord, in whom you also are being built together for a dwelling place of God in the Spirit. (Eph. 2:18-22, NKJV)

Believers are being gathered into a metaphorical building, one that grows into a holy temple. The whole of the habitation is called, “New Jerusalem.”  Jesus is the corner stone, the Old Testament prophets and the New Testament apostles have formed the foundation and we, as believers in Jesus, are stones. The people birthed by Spirit are the reality of the city.

Paul was not teaching that a “material” city made of “golden paths and pearly gates” is our mother, but rather, the heavenly city is made up of a “living city” whose foundation is the apostles and whose chief cornerstone is Jesus, a city in which we are being fitted together and joined to the cornerstone of Christ “like bricks,” and the secret to becoming building material for this city is re-birth by the Spirit—who is our Mother.

St. Hildegard, over one thousand years ago, prophesied about this city “New Jerusalem” with clarity:

The heavenly Jerusalem is to be built spiritually, without the work of physical hands, through work given by the Holy Spirit.  The greatness and loftiness of these works of the Spirit are manifest, for that city will be adorned by good works performed by people touched by the Holy Spirit.  It will be situated on upon a hill, with countless buildings assembled from the most noble of stones: the holy souls in the vision of peace, purified from all taint of sin.  And so, with these precious stones it will shine like gold; for wisdom displays her brightness in good people.”[1]