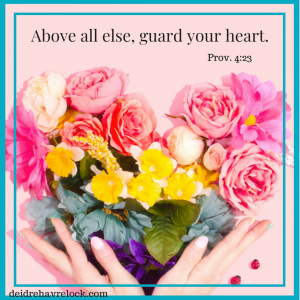 “Keep your heart with all vigilance, for from it flow the springs of life.”  –Prov. 4:23

The Garden Represents the Heart

Then the Lord God took the man and put him in the garden of Eden to tend and keep it. And the Lord God commanded the man, saying, “Of every tree of the garden you may freely eat; but of the tree of the knowledge of good and evil you shall not eat, for in the day that you eat of it you shall surely die.” —Gen.  2:15–17 (NKJV)

But is garden life really just a world of flowers and fruit trees, and is Adam’s God-inspired work that of a simple gardener–cultivating the plants all while guarding the land from potential threat? Not at all. Ultimately, the garden is God’s kingdom on earth: 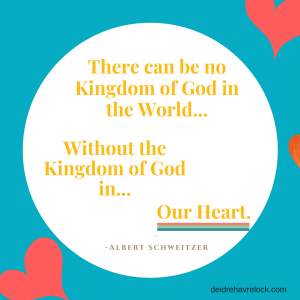 Then the king will say to those at his right hand, “Come, you that are blessed by my Father, inherit the kingdom prepared for you from the foundation of the world.”  –Mt 25:34, NRSV

You [Jesus] were slaughtered and by your blood you ransomed for God saints from every tribe and language and people and nation; you have made them to be a kingdom and priests serving our God, and they will reign on earth.” –Rev. 5:9–10, NRSV

The kingdom that God wants us to enjoy begins with our heart. A heart that loves God and loves their neighbor is a kingdom heart. All good things flow from a kingdom heart. When a heart becomes divided (against God or against neighbor) the kingdom of God cannot manifest on earth. Eden, regardless if it was an actual place was also — and most importantly — a place of the heart.

It was here in the lush — and extremely fertile — garden of Eden, that both man and woman (the two representatives of God) would dwell and hold dominion. Through the garden scenario, we understand that God’s righteous and loving kingdom had been established on earth through the hearts and minds of the two people He had created.

Unfortunately, a kingdom divided against itself cannot stand. And in the end, the kingdom that God prepared for us from the foundation of the world became divided — man against woman; and neighbors against God — and it fell.

“Every kingdom divided against itself becomes a desert, and house falls on house.” –Lk. 11:17, NRSV

The Heart is the Place Where God Meets With Us

They heard the sound of the LORD God walking in the garden at the time of the evening breeze. –Gen. 3:8, NRSV

I pray that, according to the riches of his glory… that Christ may dwell in your hearts through faith, as you are being rooted and grounded in love. –Eph. 3:16–17, NRSV

Because the garden is God’s kingdom on earth (a kingdom best understood as existing within the human heart) we can then understand that “tending” and “guarding” the garden isn’t at all about clipping roses, tilling fields, and physically watching for enemies. Garden life is about keeping our hearts aligned with God through a love-based relationship. Garden life is about remaining kingdom focused within the depths of our very being. Anything that jeopardizes the love a person has not only for God — but also for their neighbor — becomes a serious threat to the “garden.”

The Heart is Fertile Ground 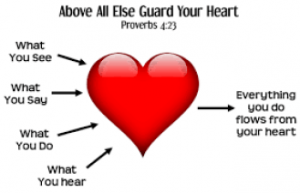 Unfortunately, we are sometimes taught that because Adam was given the mandate to guard the garden this must mean men in general are not only the world’s protectors but also woman’s. Such teaching loses the enormous purpose of true garden life as the garden mandate “to be on constant guard” is a mandate that all children of God have. We are each responsible for the guarding of our own heart and we all must “cultivate” the soil of our “gardens” in order to produce the fruit of the Holy Spirit:

Figs are not gathered from thorns, nor are grapes picked from a bramble bush. The good person out of the good treasure of the heart produces good, and the evil person out of evil treasure produces evil  –Lk 6:44–45, NRSV

For it is from within, from the human heart, that evil intentions come: fornication, theft, murder, adultery, avarice, wickedness, deceit, licentiousness, envy, slander, pride, folly. All these evil things come from within, and they defile a person. —Mark 7:21–23 (NRSV)

Adam was to Cultivate and Guard his Heart

For Adam, God’s word to “guard the garden” was a prophetic warning of impending danger: Adam’s heart would come under attack. If Adam were to stay the course and keep his heart aligned with the love of God then the attack would not prevail. But if Adam’s heart did the unspeakable and instead turned away from God then death would win. When God introduced the law, it was a simple means to reveal the deepest parts of  humanity:

“Of every tree of the garden you may freely eat; but of the tree of the knowledge of good and evil you shall not eat, for in the day that you eat of it you shall surely die.” —Gen. 2:15–17 (NKJV)

When God established that very first law (not to eat from the tree of the knowledge of good and evil), the law’s purpose was to bring to light what lay hidden within the heart and mind as Romans 5:12 explains, “Sin is not reckoned when there is no law.”

The heart is devious above all else; it is perverse—who can understand it?  I the Lord test the mind and search the heart, to give to all according to their ways, according to the fruit of their doings. —Jeremiah 17:9-10 (NRSV)

So God tests our hearts and minds in order to reveal to us what it is that we really value, desire and believe. How does God do this? Easy—“sin is not reckoned when there is no law.” Therefore, God establishes a law.

Notice, the law is not given to Adam because he is Eve’s leader. *The law is given to test and reveal the state of the heart and mind:

The Lord made for them a statute and an ordinance and there he put them to the test. —Ex. 15:25, NRSV

Adam’s Heart was Conquered by Death

The heart is where love and covenant are kept; the mind is where understanding is kept. Adam and Eve were created by God in God’s very “image and likeness.” This means the couple both “represented” God and “looked” like God. They were earthly metaphors for the God who created the universe. They were living allegories of a very real God — so close in person to the God who created them that they were thought of as His/Her very children.

It was precisely because of who they represented, that they were given dominion over the earth. Having dominion meant that both their hearts and minds should exist in love and unity with both each other and with the God who created them. If either of these two God-representatives were to fall into sin — if they were to think and act in ways divergent to the God they fully represented; OR, if they were to turn against love altogether — they would risk losing the kingdom entrusted to them.

In order to stay in this position of dominion both Adam and Eve had to guard their hearts and minds. Not surprisingly, these are the two places where the enemy directed his assaults.

A fall always begins in the mind or the heart. 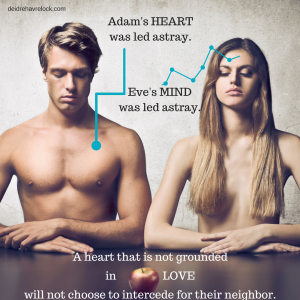 (1) The Mind: We can either become confused, and then act faithlessly based upon misunderstanding and uncertainty. This type of sin does not lead to death; it is a “deception.” A deception plants a falsehood inside a person that can cause extreme damage.

Well, we all know the story of Adam and Eve’s fall. First, the serpent attacked Eve’s mind:

But I am afraid that as the serpent deceived Eve by its cunning, your thoughts will be led astray from a sincere and pure devotion to Christ. –2 Cor. 11:3, NRSV

Next, Adam was attacked. Adam knowingly chose to eat the fruit, meaning he was not deceived or “tricked” into eating it as Eve was. “Adam was not deceived, but the woman was deceived and became a transgressor. —1 Tim. 2:13–14, NRSV.

The act of Adam taking the fruit from Eve without hesitation reveals to us the state of Adam’s heart. Once Adam ate, death set in. Death followed Adam’s action because Adam’s heart had turned completely from God toward death.

And this is the judgment, that the light has come into the world, and people loved darkness rather than light because their deeds were evil. –Jn. 3:19

It was Adam’s sin of purposefully choosing to eat the fruit and thereby walking away from God in order to bow down to death (in other words, his heart became divided) that broke the covenant relationship and ended kingdom life (until Jesus showed up, that is):

“But at Adam they transgressed the covenant.”  –Hosea 6:7

For more information on Adam and Eve’s sin GO TO: Adam & Eve, Two Types of Sin