Why did John the Baptist describe the Holy Spirit as a dove? The description “like a dove” is a simile for female beauty. Therefore, God is not a dove, but the Spirit of God is beautiful like a dove.

“Now when all the people were baptized, and when Jesus also had been baptized and was praying, the heaven was opened, and the Holy Spirit descended in bodily form like a dove upon Him, and a voice came from heaven which said, ‘You are My beloved Son; in You I am well pleased.’”  (Lk. 3:21-22)

The Holy Spirit is NOT a bird

In Luke 3:21 above, we have Luke describing what John the Baptist saw on the day of Jesus’ water baptism, “heaven was opened, and the Holy Spirit descended in bodily form.” John saw a “bodily form.” The Greek words used here are (bodily) “sōmatikŏs” which means “a whole body” and (form) “ĕidŏs” which means “appearance of shape.” So John literally saw a “body image” come down from heaven and he described this image as “like a dove.” You will notice the phrase “like a dove” does not mean an actual dove was seen—it is a simile.

A simile is a figure of speech comparing two relatively dissimilar things. In other words, a dove and God’s Holy Spirit are very different from each other (one is an animal and the other is God)—but similarities can still be drawn.

It is unfortunate so many Christians believe (and teach) that an actual dove was seen coming down from heaven. After all, there is nothing in the Bible that tells us God exists as an animal — Adam and Eve (man and woman) are the “image and likeness” of God. God also does not operate by illusion, manifesting Himself/Herself in a cloak of misrepresentation — God is all about revealing truth. He/She is a revelatory God. So despite the church’s longtime use of the dove as a symbol for the Spirit, we must leave behind the picture of a dove flying down from heaven and landing on Jesus’ shoulder. We must see the Holy Spirit as John saw her.

What exactly did John See during Jesus’ Baptism? — He Saw a Woman

John did not see a dove, but he did see something, or rather someone. John is Jewish and the expression “like a dove” was a favorite and often used Jewish simile for female beauty and tenderness (see the Jewish Encyclopedia). This is why the term “dove” is used often throughout the Bible (including the Old Testament Apocrypha) to describe females: 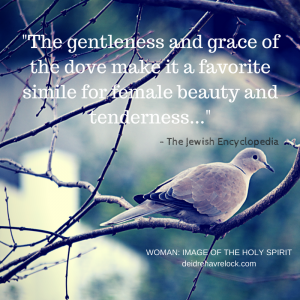 It is decreed that the city be exiled, its slave women led away, moaning like doves and beating their breasts. –Nahum. 2:7, NRSV

The Lord gives the command; great is the company of those [women] who bore the tidings: And she who remains at home divides the spoil. Though you lie down among the sheepfolds, you will be like the wings of a dove covered with silver, and her feathers with yellow gold. –Ps. 68:11-13, NRSV

You have dove’s eyes behind your veil. Your hair is like a flock of goats, going down from Mount Gilead. –Song of Solomon 4:1, NRSV

Mother, embrace your children; bring them up with gladness, as does a dove; strengthen their feet, because I have chosen you, says the Lord. –2 Esdras 2:15, NRSV

What John saw was not an actual dove. John saw a beautiful woman, the Spirit, the Helper, come down from heaven, superimpose over Christ and remain with him. What John saw was what Jeremiah prophesied about long ago:

How long will you waver and hesitate [to return], O you backsliding daughter? For the Lord has created a new thing in the land [of Israel]: a female shall compass (woo, win, and protect) a man. –Jer. 31:22, Amplified Bible

And the most natural way for John to describe this amazing vision of the very feminine Holy Spirit encompassing (surround on every side–shield and lead) Jesus at his baptism was to say “the Holy Spirit descended like a dove.” The first thing the Spirit did was to lead Jesus into the desert. And Jesus submitted to the Spirit’s rather intense leading:

And the Spirit immediately drove [Jesus] out into the wilderness. He was in the wilderness forty days, tempted by Satan.   –Mk 1:12–13, NRSV

If Something is Described as “Spirit” Doesn’t that Mean It’s Invisible? — NO

There are many places in the Bible where the spirit world invades the natural, and at first glance the spiritual can’t be seen. However, it seems in order to “see” what exists in the spiritual realm one must first have their eyes healed (opened) by God:

You do not realize that you are wretched, pitiable, poor, blind, and naked. Therefore I counsel you to buy from me gold refined by fire so that you may be rich; and white robes to clothe you and to keep the shame of your nakedness from being seen; and salve to anoint your eyes so that you may see. –Rev. 3:17–18, NRSV, bold added

Then the LORD opened the eyes of Balaam, and he saw the angel of the LORD standing in the road, with his drawn sword in his hand; and he bowed down, falling on his face. –Num. 22:31, NRSV

Then Elisha prayed: “O LORD, please open his eyes that he may see.” So the LORD opened the eyes of the servant, and he saw; the mountain was full of horses and chariots of fire all around Elisha. –2 Kings 6:17, NRSV

Therefore, just because something is “spiritual” does not mean it is invisible. And the same goes for the Holy Spirit. If you want to see the Spirit, read Revelation 12 and you will see her as the apostle John saw her. If you would like to read about the first time I saw the Spirit of God read Introducing the Holy Spirit.