For those looking for an interesting read regarding the femininity of Holy Spirit be it short or long, here are a few of my favorites that I thought you may enjoy reading while sipping a lovely pumpkin spice latte.

The earliest Christians – all of whom were Jews – spoke of the Holy Spirit as a feminine figure. The present article discusses the main proof texts, ranging from the ‘Gospel according to the Hebrews’ to a number of testimonies from the second century. The ancient tradition was, in particular, kept alive in East and West Syria, up to and including the fourth century Makarios and/or Symeon, who even influenced ‘modern’ Protestants such as John Wesley and the Moravian leader Count von Zinzendorf. It is concluded that, in the image of the Holy Spirit as woman and mother, one may attain a better appreciation of the fullness of the Divine.

The Maternal Face of the Holy Spirit 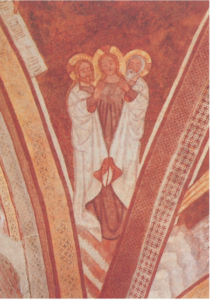 I had the honor of previewing Dr. István Gábor Cselényi’s new translated book last year. It is currently only available as an ebook. His book contains some excellent research into the history of Wisdom Sophia and her connection to Holy Spirit. My thanks goes out to István for the long hours of research and writing that went into this lovely work that reveals Holy Spirit as Mother.  The art in particular is of great interest.

God as a woman giving birth

The most common image that depicts God as a mother can be found in Isaiah 42:14, where the prophet elaborates on Yahweh’s anger and pain: “I have long time holden my peace; I have been still, and refrained myself: now will I cry like a travailing woman; I will destroy and devour at once.” In verse 16, he states that the world is reborn from God’s labor pains: the darkness of the blind turns into light.

Moses complains about his people with the following words: “Of the Rock that begat thee thou art unmindful, and hast forgotten God that formed thee.” (Deuteronomy 32:18).

The image of the woman in labor is also taken over by the New Testament: in Acts, in his Aeropagus sermon, the Apostle Paul talks about God making references to Greek poets: “For in him we live, and move, and have our being” (Acts 17:28).  Apart from our time in our mother’s womb, we never live in another person, but we can perhaps see the entirety of mankind – regardless of color of skin, sex, religion, political and economic systems – living, moving and acting in the cosmic womb of God.

This view is reinforced by the Apostle Paul himself when he writes in his letter to the Romans: “For we know that the whole creation groaneth and travaileth in pain together until now. And not only they, but ourselves also, which have the first fruits of the Spirit, even we ourselves groan within ourselves, waiting for the adoption, to wit, the redemption of our body” (Romans 8:22-23). He seems to regard salvation as the birth, which happens not only in the lives of individual people, in the microcosm but in the entire creation, in the macrocosm.

These statements encourage us all to see the images of “being born again” as the evidence of the existence of the female component in the world, while the call for a spiritual rebirth should be interpreted as a call to experience God’s maternal womb and mankind’s birth from there. In other words, it is a call to quit our egotism and to tune into God’s will the same way as the fetus is in complete harmony with and in the circulation of the mother carrying it. The discovery of God’s motherhood could therefore serve not only our inner peace but also the universal peace of the human race.