I remember a movie I went to as a young woman; it was called Agnes of God. The basis for this movie was a young nun, Agnes, after delivering a still-born child, describes to the head nun how she had a mystical visitation by the Holy Spirit, explaining that she had been carrying another Holy child of God. However, as the show goes on, it becomes evident that it was not the Holy Spirit who impregnated Agnes. Rather, she was seduced and possibly even raped. Young Agnes’ mind had covered these shameful, hurtful details with the mystical idea that the Holy Spirit had come to her gently, lovingly—and impregnated her. In the end, Agnes revealed how she had actually killed the baby immediately after its birth. I tell you this dramatic story to illustrate how we currently view the Holy Spirit: as one who impregnates in sort of the same way a male would impregnate a woman. Surprisingly, however, I discovered while exploring my Bible that this is not at all what the scriptures tell us:

Then Joseph her husband, being a just man, and not wanting to make her [Mary] a public example [of adultery], was minded to put her away secretly. But while he thought about these things, behold, an angel of the Lord appeared to him in a dream, saying, “Joseph, son of David, do not be afraid to take to you Mary your wife, for that which is conceived in her is of [“ĕk”] the Holy Spirit. (NKJ Mt 1:19-20)

In the verses above, the Bible uses the word “ĕk” (translated “of” or “from”) to denote origin as in, “that which is conceived in her is of the Holy Spirit.” This word is extremely important because the New Testament uses the Greek word “ĕk” in connection to a woman giving birth. “ĕk” means, “to bring forth from a woman,” or “out from a woman.” It is from this word that Jesus first introduced his church the “ĕkklēsia:”[1]

And I also say to you that you are Peter, and on this rock I will build My church [ĕkklēsia], and the gates of Hades shall not prevail against it. (NKJ Mt 16:18)

The Greek word “ĕkklēsia” is a compound word. The two words that make up Jesus’ word for church are “ĕk” and “kalĕō.” “ĕk” means “out from (by inference of birth from a woman)” and “kaleo” means “to call.” So the church is, in effect, made up of people who are “called out from a woman” or called out of the world to be birthed alive in the Spirit.

When a father is spoken about as the procreating factor, the word the New Testament uses is “gĕnnaō” which means “begot” or even to “father a child.”  See the following examples where the words “ĕk” (by or out from a woman) and “gĕnnaō” (begot or conceived from a father) are used:

The Greek scriptures use very precise words to reveal the origin of Christ, words and phrases we may not totally understand at first glance, but Joseph certainly would have. In other words, Joseph knew when the angel said, “Joseph don’t be afraid because the origin of this baby is “by” (ĕk) the Holy Spirit,” that this baby was wholly God’s birthed into her “by” another woman. His wife was not being impregnated by the male Spirit of God. Rather, the feminine aspect of God would supervene and the miraculous power of the Holy Spirit would envelope Mary, birthing into her someone extremely special and then Jesus would physically enter this world “by” Mary. So there are two persons—in fact, two women—involved in the birth of Christ. One of them is our spiritual mother and the other is an example of truly amazing faith. 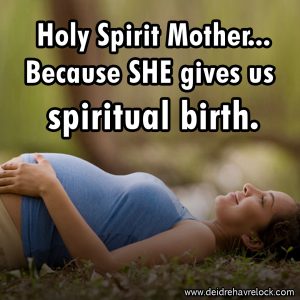 [2] Bathsheba was the wife of Uriah.