Why is the Bible Mostly about Men?

Have you noticed that in the Bible men and sons seem oddly blessed with purpose? For instance, Noah and his sons (Shem, Ham, and Japheth) started a whole new world (we aren’t even told Noah’s wife’s name[1]). God stepped in and saved Abraham’s son, Isaac, from being sacrificed, establishing a covenant with him; but Jephthah’s daughter became a burnt offering because of her father’s rash vow—with no one stepping in to save her. Jacob and his twelve sons became a chosen nation; Jacob’s daughter, Dinah, was raped and Jacob’s wife, Rachel, died giving birth to Jacob’s beloved son, Benjamin. Aaron and his sons were chosen to minister in God’s holy temple; Aaron’s sister, Miriam, was punished with leprosy and was the first to die on the journey toward the Promised Land.[2] And then there was King David and his son Solomon, both were chosen by God and anointed as kings. But their wives? There were so many of them, it’s impossible to name them all!

It was during my first reading of the Bible that I noticed men working with sons held great significance and purpose. It seemed like God actually liked—dare I say preferred—working through them, but daughters and mothers I wasn’t too sure about. This brought me to questioning why? Why were men and sons so seemingly blessed with leadership? Why were women largely left to watch from the sidelines? Was this my fate because God preferred it and, therefore, ordained it? “Help me, Holy Spirit,” I began praying. “Help me understand how you feel about women.” After uttering that prayer a few times, and after spending time reading my Bible, I came across another interesting thread woven throughout our scriptures; this one was on partiality:

The word partial means just that—in part. It means we do not appreciate the whole. We are partial to a portion. After reading about partiality in the Bible, I realized God, Jesus, and the Holy Spirit were in no way partial. They always embrace the whole.  Therefore, whenever I read something in the Bible that suggested, even slightly, that God prefered to work through men (such as Jesus choosing to work with twelve male apostles), I reminded myself that God is not partial to working with men and the Holy Spirit does not have a trace of partiality. But still I wondered and prayed: Why does God choose over and over again to work primarily through men and sons? Finally, one morning (with this question lingering in my mind), I awoke to the voice of the Spirit saying to me, “Deidre, get up and read the story of Noah.”

The Story of Noah – Partiality 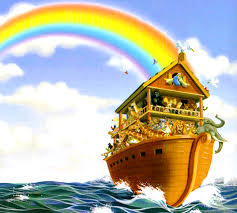 Of course, being told to read the story of Noah didn’t immediately ignite passion in my heart. I remember responding to the Spirit, “The story of Noah? But that’s a boring kid’s story!” Fortunately, as I spent time with Noah, I realized his story wasn’t boring in the least. Noah’s story is about universal redemption going askew due to the tragedy of the human heart. Through Noah’s sin, God, yet again, shows us the darkness our hearts so desperately cling to—we are partial.

In getting to know Noah, the first thing to notice is that his name means literally “rest”:

It’s no coincidence that the name Noah means “rest.” Take a moment to remember, the people during Noah’s time had been working the cursed ground since the days of Adam:

With the birth of Noah, Lamech’s hope was for a little relief from the toil of working this cursed ground. Perhaps in the mind of Lamech the name Noah was a prophetic declaration to end the curse. Or, at the very least, Noah (Lamech’s first-born son) would be sure to bring him some personal relief since there was now another set of hands able to work the fields.

As the story of Noah goes, the world was now fully corrupt with sin and violence: “The lord saw that the wickedness of humankind was great in the earth, and that every inclination of the thoughts of their hearts was only evil continually” (Gen. 6:5). Therefore, God came up with a plan. He would send a cleansing flood across the whole earth. However, he would save one family—not to mention a multitude of rambunctious animals—by having a man build an ark sturdy enough to withstand the coming waters. God chose Noah because he was the one righteous person left on earth. We are told in Genesis 6:9-10 that “Noah was a righteous man, blameless in his generation; Noah walked with God. And Noah had three sons, Shem, Ham, and Japheth.” (Ahem… Noah also had a wife.)

In due course, the directive for Noah to build the ark was sent out. Noah dutifully responded out of faith. Once the ark was built, God said to Noah:

Stop here and notice exactly how God told Noah to go into the ark: “you, your sons, your wife and your son’s wives.” Also notice how God told Noah to bring with him two of every kind of animal—male and female. God’s people enter the ark male united with male, and female united with female. The animals, however, enter two by two—male united with female. As the righteous Noah obeys God, the event is sealed with the standard closing, “Noah did all that the Lord had commanded him” (Gen. 7:5). This choreographed escape becomes our template for restoration. Why? Because Peter describes Noah’s salvation through water as a prediction of Christ’s coming baptism:

God came up with a plan to bring about a universal restoration. Through the waters of “baptism,” God would save humanity and replenish the world with righteousness, restoring everything that had been lost through the onslaught of sin. In the early stages of Noah’s story, everything went as planned: the waters came, the family was saved, along with animals both male and female. Eventually the flood waters subsided and the ark came to rest on dry ground. It was here where God then commanded Noah to come out of the ark: 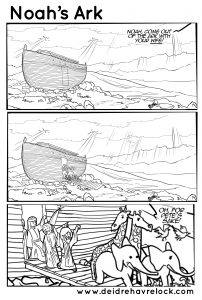 The Blessing of Noah and Sons—Domination

It was after Noah’s unfortunate exodus that he immediately set up a burnt offering, probably to say “thank you” for having been saved. You would think, at this point—since Noah was the only righteous man on earth—that God would have been greatly pleased with Noah. Instead God says this:

The inclination—or the bend of the human heart—is toward evil. Ultimately, Noah had a chance for complete renewal—the reversing of the fall. But Noah’s heart (whether he realized it or not) did not wish to rule with his wife as God had first ordained dominion in the Garden of Eden (Gen. 1:28). Maybe, by this time, due to the fall, men had become accustomed to ruling over their wives.[4] Maybe, after losing everything in the garden, this small bit of authority gave men a feeling of importance and prestige, or maybe Noah simply forgot what true love was:

Although God had chosen Noah because he was “a righteous man, blameless in his generation” (Gen. 6:9), Noah fell short. His heart proved to lack in love because of the sin of partiality. Noah chose to rule with his sons despite God’s command to stand beside his wife. Because of Noah’s sin, the order of the new world was set.

From this point onward, God worked within Noah’s chosen paradigm of fathers united with sons. Consequently, God blessed not Noah and his wife—as He originally blessed Adam and Eve in the Garden of Eden—but rather, in this new world, God blessed Noah and his sons:

God blessed Noah and his sons, and said to them, “Be fruitful and multiply, and fill the earth. The fear and dread of you shall rest on every animal[5] of the earth, and on every bird of the air, on everything that creeps on the ground, and on all the fish of the sea; into your hand they are delivered.” —Gen. 9:1-2, italics mine (NRSV)

Now compare that blessing with Adam and Eve’s original blessing:

God blessed them [man and woman], and God said to them, “Be fruitful and multiply, and fill the earth and subdue it; and have dominion over the fish of the sea and over the birds of the air and over every living thing that moves upon the earth.” —Gen. 1:28 (NRSV)

God worked within Noah’s chosen paradigm of fathers united with sons and blessed NOT Noah and his wife as He originally blessed Adam & Eve in Eden, instead God blessed Noah & Sons.
Click To Tweet

What fathers and sons received was not dominion; what they received was domination: “The fear and dread of you will be on all living.” In the garden (before the fall) there was no fear, there was no dread. There was simply the joy of unity, of man and woman being who they were created to be, children of God, images of the Almighty, and neighbors with authority. But with woman’s blessing usurped, now not only would the husband rule his wife, now men and sons would dominate the landscape. And certainly, from this point onward, men and sons dominate our scriptures; and throughout the course of history, they have dominated the world; and even today, though many have repented, men and sons within our churches continue to uphold a doctrine of domination.

Biblical patriarchy is upheld by Noah as he disobeys God's command to come out of the waters of baptism with his wife at his side in a restored order, choosing instead to stand with his sons.
Click To Tweet

[3] You may need a literal Bible translation in order for this prioritizing of peoples entering and exiting the ark to be apparent. Many interpretive Bible translations lose the purposeful order. The NIV states the verse as: “Then God said to Noah, “Come out of the ark. Bring your wife and your sons and their wives with you.”

[4] See Gen 3:16, “To the woman he said, ‘I will greatly increase your pangs in childbearing; in pain you shall bring forth children, yet your desire shall be for your husband, and he shall rule over you.’”

[5] Although the NRSV uses the word “animal,” the actual word used in Hebrew is chay, meaning “alive” as in “The fear and dread of you shall rest on all living on the earth.”