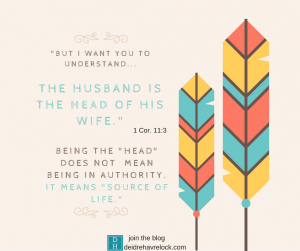 The book of Genesis describes the control and domination issues between men and women as arising from the fall of both Adam and Eve. After Eve ate the forbidden fruit, God said to her:

“To the woman he [God] said: I shall give you intense pain in childbearing, you will give birth to your children in pain. Your yearning will be for your husband, and he will dominate you.” (The New Jerusalem Bible, Ge 3:16)

Before this scenario, however, men and women–together–walked in “dominion.”

“So God created humankind in his image, in the image of God he created them; male and female he created them. God blessed them, and God said to them, ‘Be fruitful and multiply, and fill the earth and subdue it; and have dominion….’” (NRSV Gen 1:27-28).

Men and women once ruled together–they had dominion. After the fall…things changed. Men dominated (ruled, led) their wives. But when Jesus came upon the scene, sin was forgiven and woman–supposedly–were no longer “ruled” by their husbands. However, many argue that the new testament teaches that husbands should “lead” their wives because they are considered the “heads.”

This is the key verse that many pastors teach “male leadership” from. Men are to be “the heads of their wives.” In fact, in the past, I’ve been called “a neck” numerous times by different pastors during Sunday morning services. This designation of the wife being the neck is supposed to be a funny and gentle reminder that my husband is the true leader and I am one rung below him–I can, therefore, persuade my husband, but I certainly cannot lead him.

But notice in the above scripture that “Christ is the head of man.” What does it mean to “be the head of man”? Does Christ lead men but not women? Obviously not, since Jesus showed us in the Bible that he is willing to teach both men and women.  A husband and wife team simply does not wait for the husband to communicate with Jesus in order to receive direction and teaching–both husband and wife seek God’s Holy Spirit for direction. So if Christ isn’t just the leader of only men, what is this verse really saying? Actually, this verse doesn’t speak about leadership at all–it speaks about “source.”

Being the “head” does not mean being in authority

Let me say that again, Being the “head” does not mean being in authority. After all, in the Bible the phrase “under the feet” means subjugated under authority). Nor does “head” signify the place where decisions are made (in the Bible the “heart” makes all decisions). Rather, the Bible uses the image of head as being “the source of life.”

Being the “head” means you are the “source of life”

In the Bible, when you want someone dead you take their head. OR, if you want to kill a whole army, you take the leader’s head—you go straight to the “source of life.” This action guarantees the death of the whole army. See Dan. 1:10 for another example of “head” referring to “life.” Likewise to “lift up the head” (see Gen. 40:13) means to grant life and to “bow the head” means to give up your life:

When Jesus had received the wine, he said, “It is finished.” Then he bowed his head and gave up his spirit. (NRSV Jn 19:30)

1 Corinthians 11:3 is not speaking about who should lead. It is describing the process of birth…”For just as woman came from man, so man comes through woman; but all things come from God” (1 Co 11:12).

God does not operate in hierarchy; He operates in a relationship based on mutual love and respect. And so should we.

For more info on this subject go to: Adam is the “Head” of Eve