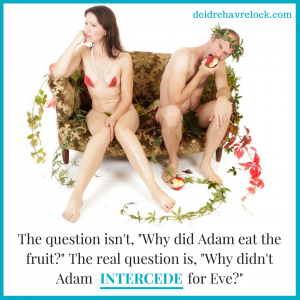 Yes, Eve Was Tricked into Eating The Forbidden Fruit, But Have You Ever Wondered: Why Did Adam Eat?

I was sitting around one day, thinking about Adam and Eve (yes, this is the kind of thing I do) when the question struck me, “When Eve ate the fruit from the “Tree of Good and Evil” why didn’t Adam just jump in and intercede for her?”  Surely, that would have been the “loving” thing to do. Instead, Adam ate–why?

Of course, I had been taught through various churches and through Christian books I had read, that Adam ate the fruit after Eve because she persuaded him to do so. Adam erroneously followed Eve’s coaching because of his intense love for her.  In our imaginations we see Eve in the garden; she has just eaten the fruit and now she turns to her husband with a seductive smile and says something like, “Go ahead, you should eat this fruit. Do it for me.” To which Adam can only respond with fierce affection—he must obey Eve because of his love for her, as though his thinking went… “Well, if Eve’s going down this road of death then we’re both going down it together because I love her so much.” But take note: throughout the whole scenario with the serpent and the fruit, Eve says nothing to Adam. Eve does NOT speak to Adam. Adam eats, and no persuasion is needed.

Eve is the “Helper” who Received no Help 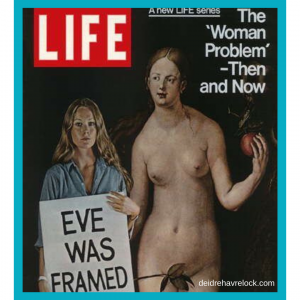 After all, when genuine love is involved, the first thing we do when a loved one falls into a trap set by an enemy is we rescue them; we plead for forgiveness and mercy on behalf of the one we love–we want to help them to become restored. What we don’t usually do is join them in their sin (unless we’re a little mixed up ourselves, perhaps waiting for the perfect opportunity to delve into the sin without drawing too much attention to our own sin — just sayin’).

And if we are deeply in love with someone (as Jesus is with humanity), we might even substitute ourselves with the person who committed the sin, saying “Let me take the consequence instead!” (As Jesus did for us). Interceding for humankind, that certainly is what Jesus did. He is our faithful intercessor. Jesus does not follow people into sin because he “loves” them. “Adam followed Eve into sin because of his intense love for her” sounds like a line because it is. It’s an explanation that is not sincere nor true.  Love rescues people. Love truly helps people. So when Adam didn’t step up for Eve, Jesus did. Jesus is the one who did not fail Eve. Jesus is the one working for Eve’s complete restoration.

The unfortunate truth about Adam’s fall is this (1) Eve did not convince Adam to eat the fruit. (2) Following Eve into sin provides Adam with a rather convenient scapegoat — the first to fall is seemingly to blame and accordingly sin can be attributed to them, leaving them feeling rather unfit and incompetent (especially if they were the one originally anointed to “help”; whereas the other person’s sin goes unaccounted for, hidden under layers of lies.  (3) Only two individuals leave the garden with any authority: Satan had authority over the world; and Adam now had authority over Eve.

So perhaps it’s time to crack open the book of Genesis again. And this time, instead of thinking how “in love” Adam was with Eve, ask yourself these all important questions, “When Eve fell, why didn’t Adam just simply intercede for her? What did Adam gain by eating the fruit?”

These questions, I believe, are key to understanding what really went down in Eden.

For more info on why Adam ate the fruit instead of interceding for Eve go to: Adam & Eve – 2 Different Types of Sin 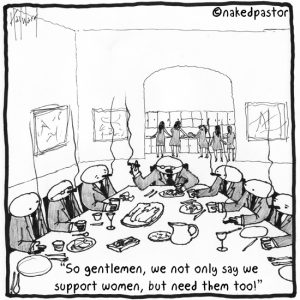