I just got a phone call from a good friend of mine. She had watched the Beth Moore video (that I’m sure you’ve all seen by now). She told me she finally “got” why I do what I do.

She said it wasn’t so much the message of “women can’t preach” in the video that got her all stirred up and angry (she’s been living with that message for years); rather, it was the attitudes of the men — they actually seemed to enjoy belittling women. In other words, this wasn’t about trying to please God by humbly following a rule. This was about, as she put it… evil.

She then asked me what I thought about the video. And here I had to admit, that even though I am well aware that the event has happened, I had not actually watched it. Why have I not watched it? Well, there’s nothing wrong with watching it (I probably will get around to watching it — there I just watched it). But the truth is this: what is taking place in that video is the final prolonged cry of a dying age. After all, when something is about to die (and it doesn’t want to die) that is when it gives its final roar — its last message.

The old age is in the process of “death throes” — the process of dying or ending in a very painful or unpleasant way. I’ve been ignoring the noise coming from the old dying age, simply because I’ve been busy in the last few months listening to the Spirit tell me about the coming new season.

We are currently transitioning into a new season. This new season is the time of the Spirit. And anyone who has been operating in the flesh during this past season will feel very, very uncomfortable as we move into the new. They will rage against the new. They will do all sorts of irrational things to keep the new from coming — think of Beth Moore as being symbolic of the new — and so men attack her because the new just doesn’t make sense to them. Therefore, they do weird things like mocking women in an attempt to keep the status quo.

But the new has already dawned. And nothing can now stop it.

I think the hardest part of watching the old die away is keeping a respect for it. The old, after all, got us so far. The old worked, in certain ways, and many people did their best — according to what they knew and what was revealed. But it’s time to move on. So tip your hat to the old, but don’t get too caught up in their death throes.

I have been waiting for this new season my whole Christian life. I have been told that I was created specifically for the new — which is why the Holy Spirit initiated a friendship with me from very early on. My ministry has always been one of “going deeper with the Holy Spirit.” And this new season is precisely about choosing, developing, and thriving in a Spirit-led life.

Of course, the world will continue to go through a very dark time of violence and confusion, but it is in the darkness that the Spirit shines best. She is here to lead us forward so that we can truly help those around us. How do I know the new season has dawned?

A New Season of Spirit-led Worship and Preaching is Here 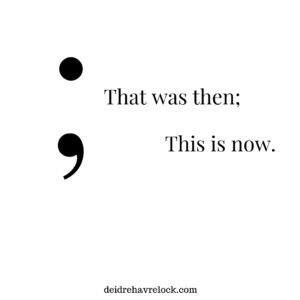 On July 12, 2019 after much prayer regarding the coming new season of the Spirit, I was shown a giant semicolon while I slept. Somewhat astonished, I said, “Holy Spirit, I see a giant semicolon.” And the Spirit replied: “That was then; this is now.” (The sentence was spelled out before me so I could actually see the semicolon in the sentence.) I immediately thought, hmmm… I recognize that sentence from somewhere. Immediately after this, I was in another dream where I said to a group of ladies, “The semicolon means that today my life changes; nothing will be the same.”

I then woke up and I wrote the dream down. As I was writing, I realized that the sentence “That was then; this is now” was something a friend of mine had said to me a few years prior. She had suffered from depression and she had gotten the tattoo of a semicolon on her wrist, telling me that it was a sign to her that depression is a part of her past but it does not define her future. Her life story was simply not over — That was then; this is now.

Well, later that evening I told the dream to my daughter who looked at me in complete shock. When I asked what was the matter, she informed me that she had made an appointment with a tattoo artist that day to get, that’s right, a semicolon tattoo on her arm (which she has now done). You see, my daughter has also faced a difficult past few years and to her the semicolon was a sign of hope that things were now going to change for the better. And things are changing.

We are in a time of intense change. This is not a time to give in or give up.

Women in particular are in a moment of intense change. We are moving into a time of COMPLETE RESTORATION AS GOD’S IMAGE BEARERS. We are passing from a time marked by GRIEF to a time that will be marked by JOY. So when you watch the Beth Moore video, please remember… THAT WAS THEN; THIS IS NOW.

The old is passing away (but it won’t go quietly) and a new season of freedom and power (especially for women) has dawned. It has already begun. So despite any depression you may have had due to the old season — and I know many, many of you have gone through depression and loneliness particularly in the past ten years due to loss and grief — now is not the time to sit down or go home. It’s time to spread your wings. It’s time to step out boldly. It’s time to go deeper with the Spirit. We are headed for a completely new reality.

One of the things that will take place in this new season has to do with First Nations women or American Indian women who drum. Currently, female drumming is not allowed by many Indigenous leaders — and many women drummers have been pushed aside. But I was told by the Spirit, that she wants to speak through the drums of women. So for those who think women must be barred from drumming (due to tradition) they will be missing out on something wonderful. I, for one, cannot wait to hear what the Spirit has to say through the drums of women!

If you are a woman drummer who has experienced unfair treatment remember… “That was then; this is now.” You are about to be raised up by God Herself.