Over the past year a strange phenomenon kept occurring to me–I walked into the men’s washroom four times (ok, maybe it was five). Perhaps my misguided steps were a result of a lack of focus, but then again. Probably not. I say probably not because in each case I remember purposefully looking at the signs on the door–each sign registered in my head in a different way.

I remember the events quite well. The first time I mistakenly joined the men’s room was early in the year of 2017; I was at the airport. I saw the sign below and

Once inside, faced with a wall of urinals (and men using them) it registered in my head that I was in the men’s room, so I quickly turned on my heels and left.

The second time this happened, I was at Superstore. I saw this sign… 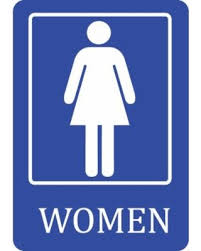 In my head, I saw the triangle dress and my head became clouded. (Honestly, I was instantly confused.) What was the triangle? What did it mean? Confused, I darted to the next room….

This time I felt totally confident I was in the right room… I walked past the urinals and opened a stall. And I used the facilities. When I came out, I said “hello” to a man who had just walked in (he nodded to me), I then washed my hands and left. As I left, it then dawned on me, THAT WAS THE MEN’S WASHROOM!

The third time this happened I was at the local university… once again, I saw this sign…

… and I walked in. This time I immediately noticed I was in the men’s room so I quickly left. I stood outside the bathrooms wondering why I kept doing this. Why am I relating to the “man” sign and not to the “triangle dress” sign? Was it because I don’t wear dresses?

When my daughter came by and asked if I had gone into the men’s washroom yet again. I said, “Yes… for some reason I relate to this image more. I mean look, I have a head, arms and legs.”

The last time I walked into the men’s washroom was just a week ago. I was at the local PlayPlace (an indoor play facility for children). I was there with my husband and grandson. The sign I saw this time was… 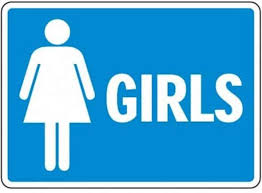 Again, in my mind there was a disconnect. I heard myself say, “I am a woman.” So I darted left (I guess headed for the “Woman’s Room”) and instead I entered the “Boys” bathroom. What was going on with my brain?! Why does the triangle dress confuse me so much!

Goodbye 2017, the year of Restoration, Activation, and  Redemption

Well, I eventually sat down and contemplated what I was learning. This past year of 2017 has been a year of restoration. Perhaps that word “restoration” has been on your mind? It certainly has been on mine. Which is why I decided in 2017 that my new focus would be “The Restoration of Eve.” After all, throughout my life, the Spirit has been leading me through the mystery of woman. And 2017 was a turning point for me. It was the year that I felt truly activated to just be me. It was like the Holy Spirit was saying to me, Everything I have taught you, everything you have been through has purpose and this is the year it begins–what was old now becomes new again; what was forgotten is remembered; what was cast aside is gathered. What you gave up on, is revived.

Welcome 2018, the year of Acceleration, Unity, and Clarity

I believe I have walked into the men’s washroom so many times this year because we are headed into a spiritual joining of men and women. Women will no longer be separated from men in terms of ministry. And as for that confusing triangle dress that has been such a mystery to me, I believe this is the year women are going to discover who they are. In fact, I recently came across another sign. This sign gave me the much needed clarity I had been looking for in terms of that strange triangle that was causing me so much confusion… 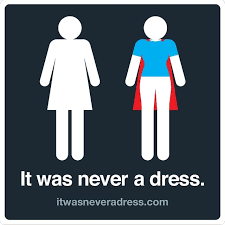 For me, the restoration of Eve is about discovery and dominion. And in 2018 the Spirit is going to move things forward with a speed we have not seen before.

Cheers! And may God bless us as we move forward in faith.