This is an old post regarding the Sandy Hook school shooting, but it still applies today in reference to the tragedy in Florida.

I have to admit, I haven’t felt like blogging since the school shooting in Connecticut. In fact, I’ve been glued to the TV, half interested in what new gun laws might come into play, but mostly interested in the news channels simply because I am so damn sad. You’d think my sadness would keep me from watching the news, but as I watch I feel like I’m mourning. I have the need to mourn for all those children who were first terrified and then murdered. I guess I’m just letting the mourning take place.

Watching TV isn’t always great though. Sometimes the interviews infuriate me. Like Bryan Fischer from the American Family Association  (link is now broken) who argued that God refused to prevent the shooting at Sandy Hook Elementary because he is a “gentleman” who doesn’t go where he is not wanted. As a Christian, this poorly thought out position (bad theology, really) drives me nuts. After all, if you want to know where God was during the shooting just take a look at the people involved–God is always in the people.

So where was God during the shooting? He/She was with Victoria Soto as she wisely hid the children under her care. God was with Ann Marie Murphy who with great compassion held Dylan Hockley, age six, in her arms while they died. God was with Principal Dawn Lafferty Hochsprung who boldly attempted to take the gunman down and was shot in the attempt. God was with kindergarten teacher, Janet Vollmer, who so gently gathered her children together and read to them in order to keep them calm (and safe).

“If they started crying, I would take their face and tell them, ‘It’s going to be OK.’ I wanted that to be the last thing they heard,” she said, “not the gunfire in the hall.”

And, dare I say it, God was even with Adam Lanza. I have no doubt in my mind that the Holy Spirit convicted Adam, warned Adam, pleaded with Adam not to carry out this plan–but Adam chose not to listen.

This is the face of God: repentance, compassion, wisdom, boldness and gentleness. Where was God? God was there…God is everywhere.  Please, don’t fall into the trap of thinking that God only shows up if you “do the proper Christian-culture thing.” (Such as implement a certain prayer every morning in a public school). We have all been created to do good works. We all represent God. Some people, we call them heroes and saints, do it better than others.

It may be surprising to hear that God is not removed from a school just because a Christian Prayer is not allowed every morning. 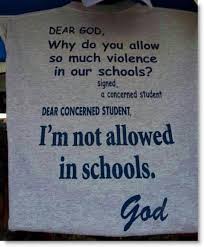 I have three children. Two attend public school and one is in a Christian school. All three of my children are Christian, all three are made in the image and likeness of God, all carry the love of Christ with them where ever they go. All of them pray. Therefore, God is still in the public school system.  In fact, I would go as far to say that God cannot be removed from the public system for the simple reason that all people are created in the image of God.

What does Jesus teach us about prayer? He tells us to get alone–in secret. However, our weakness and our fear tells us that prayer must be seen and heard in order for it to be real, which is why we cling to school prayers in the classrooms. But faith tells us:

Whenever you pray, go into your room and shut the door and pray to your Father who is in secret; and your Father who sees in secret will reward you.
When you are praying, do not heap up empty phrases as the Gentiles do; for they think that they will be heard because of their many words. –Mt. 6:6–7

So keep praying for your kids and the safety of their schools–and even if no one ever sees you praying or hears your words–God will.