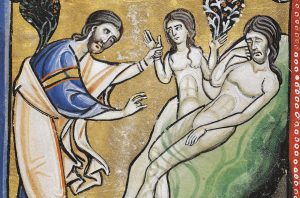 When I became engaged to my charming, Christian, evangelical husband (over twenty years ago) on a beautiful spring day, my mother-in-law-to-be wasn’t exactly overjoyed. She was sure I was the wrong girl for her lovely son. I don’t know why, perhaps it was the short skirts I loved to wear at the time, or the fact that I swore, like, a lot. But her argument to my future husband didn’t include any of these shallow assessments.  Her evaluation of me went straight to the heart of a young, Christian man. She told her son that he shouldn’t marry me because “She wouldn’t make a very good help-meet.”

When my husband-to-be told me about his conversation with his mom (and yes, he told me about it right away, almost like he couldn’t wait for my response), my anticipated retort was not disappointing. I blurted, “What the (expletive) is a help-meet?”

You see, I was a new Christian and I hadn’t read the Bible—at all. And my fiancé knew this. So after a short discussion on the creation of Eve and how God thought Adam was lonely and needed someone to be his partner in life (a help-meet), I was somewhat informed . But I was not at all enlightened. You see, it just wasn’t much of a revelation to me. After all, I had no intention on getting myself hitched only to become a “not-help meet.” I mean, who doesn’t want to be helpful? Right?

(BTW, Adam wasn’t exactly “lonely,” but he was in deep [expletive] danger — which is why God sent him help.)

Well, needless to say neither I nor my fiancé put any stock in his mother’s words. We got hitched and we lived happily together in a small town in Alberta, Canada. But that phrase, “She wouldn’t make a very good help-meet” stayed with me. What a strange word help-meet was. Help-meet. Help-meet. Help-meet. What exactly did it mean? I became determined to learn why God would invoke this weird word over Eve and, therefore, over me. And I have got to tell you, God truly enlightened me. So in a way, I guess I partly owe my love of Bible study to a mother-in-law who in the beginning was not that keen on me. Thank you, mother-in-law!

We get the crazy word help-meet from old English: one who is “suitable to help.” Below are a few renditions of the verse:

That’s a lot of different Bible translations. However, the verse that I think best describes what is going on in Genesis is this one taken from Young’s Literal Translation: “And Jehovah God saith, ‘Not good for the man to be alone, I do make to him an helper—as his counterpart’” (Gen. 2:18).

The word counterpart does not exactly mean help-meet, companion, partner, suitable, just right, or even complementary; it means able to stand face-to-face, holding the exact same designation. It means “parallel.” As in standing opposite. Eve (despite the fact that she looks slightly different) is the one who is like Adam and is, therefore, able to stand opposite him—she is able to look Adam in the eye in a face-to-face relationship — which is exactly the type of help you need when things get bad.

Parallel: occurring or existing at the same time or in a similar way; corresponding.

[tweetshare tweet=”Eve is extremely suitable to help Adam – she is his counterpart. Eve is able to look Adam in the eye in a face-to-face, heart-to-heart relationship. Adam needed HELP from somebody who like him REPRESENTED GOD. ” username=”@deidrehavrelock”]

Eve is the Helper 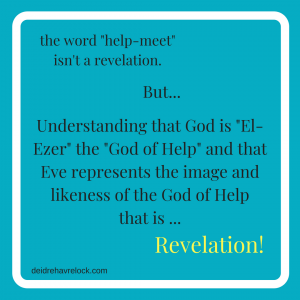 Now the word helper (ezer) is even more revealing. It means exactly what it says, helper. Misunderstanding over the term (ezer) comes from our inability to fathom the type of help this word portrays. We often view Eve in smallish ways, as merely the assistant to Adam, the one who holds the tools while Adam does the work. But ezer has less to do with assisting someone than it does with truly coming to the help, the aid, and the rescue of a person. FYI, lots of men in the Bible are named “Ezer” but no women — isn’t that interesting? The word ezer is used to denote God-saving help! 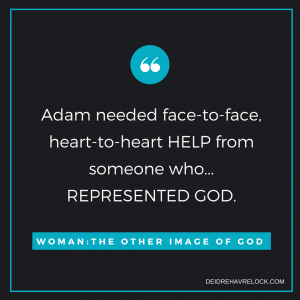 In this light, Eve is the revelation of Eliezer (el-ezer) which means the power and protection of the “God of help.” Moses understood this amazing revelation of God; after all, he named one of his sons Eliezer (God of Help). He did this specifically because he had personally witnessed God’s helping power:

Since Eve is the revelation of the God of Help, it’s not surprising that the word “helper” (ezer) is used throughout the Bible in its feminine form ezrâh in reference to God when She comes to humankind’s rescue:

You may recognize the feminine word for help ezrâh since it is the name of a well-known priest and scribe in the Bible—Ezra. That’s right, Ezra has a girl’s name! Ultimately, God did not create Eve simply because Adam was lonely. Eve was created because God knew humankind had an enemy. God knew Adam would need some serious and powerful help in the days to come. And what better person to come to the aid than the powerful female image of God—Eve.

Why Did Satan Attack Eve First? (Disarm the Helper!)

Unfortunately, the very person that God placed on this earth to “help” Adam was precisely the target that the serpent attacked first:

But the serpent said to the woman, “You will not die; for God knows that when you eat of it your eyes will be opened, and you will be like God, knowing good and evil.” —Gen. 3:4-5, NRSV, bold added

Disarming Eve was done with a double-edged sword:

(1) The Serpent was extremely cunning. He planted the idea in Eve’s mind that she was not already made in the image and likeness of God . Choosing the fruit became Eve’s downfall. She reached for the fruit in order to become like God and after eating, the deception took root in her mind — she was not like God and no forbidden fruit could fix the problem! In fact, how dare Eve even consider trying to raise herself up to the prominent position of being like God (sound familiar?)

(2) Eve became the very opposite of “help.” After Adam ate the fruit, Eve quickly morphed into a “not-help” (and nobody wants a “not-help” around, right?)…

[God said to Adam] “Have you eaten from the tree of which I commanded you not to eat?”

And to the man [God] said,
“Because you have listened to the voice of your wife,
and have eaten of the tree
about which I commanded you,
‘You shall not eat of it,’
cursed is the ground because of you.” (NRSV, Gen. 3:17)

The subtle yet seriously damaging deception that entered Eve’s mind that day in the garden through Satan’s extremely cunning words found a home in Eve and stayed. The deception blinded her (and us). No longer could Eve see herself as created in the “image and likeness” of her God. Sin clouded her mind and sadly the female image of God faded from our memories. Also, the words of Adam left a chilling mark on woman’s subconscious — when needed most — she failed Adam: “The woman whom you gave to be with me, she gave me fruit.” 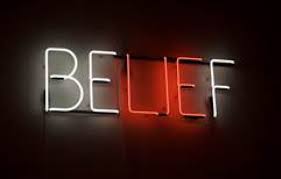 It became cemented in humankind’s heart that 1) Women do not represent God quite like men do and (2) Women are not exactly life-saving, powerful helpers; they are dangerous to men (especially our voices) and they should be subservient.

After this train wreck in the garden, only Adam was left to portray God on earth. And in doing so, he ruled over Eve easily. In the end, Adam was still God-like and Eve was a pathetic, wanna-be-God sinner. Satan, through the serpent, did a number on Eve. She was disgraced, debased, deactivated, and subdued.

Ultimately, if Adam desires to rise to full strength, he needs Eve standing united by his side. And the wonderful truth is (despite the chaos you may see happening around you) this is exactly what is taking place on the earth today. The restoration of Eve is taking place.

[tweetshare tweet=”WOMAN is the missing spiritual revelation — the EZER of God must be re-established in order for dominion to take place. ” username=”@deidrehavrelock”]

Image and Likeness of God